Walter Kröhnke, German painter, 1903-1944, who worked in a style, which was not accepted by the Nazis, tried to send as many works as possible out of Germany in the years between 1937 and 1939. He asked foreign artists, who had similar names like his to take his works with them. For years he had signed his works - if at all - only with his initials “W.K.“, so that anyone, who had initials close to his, could take the paintings with him or her, claiming to be their own. One of them was Mary Wykeham, formerly of 45, Redcliffe Road, London S.W. 10, later the Little Sister Mary of Jesus of the Fraternity of Jesus, who took 18 paintings with her, wich are now being searched for.

Walter Kröhnke was a photographer too. He had documented his own works in black and white and in colour photography. The slides have faded and changed colours during the last sixty years. They however still serve their purpose. Fourteen paintings missing in London are represented here as they appear on the slides the artist took:

The list Walter Kröhnke prepared, when Mary Wykeham took the works with her in 1938 in a case, as it was remarked, contained four more paintings of wich there are no photographic records in colour: They are mentioned here, followed by Kröhnke´s list: 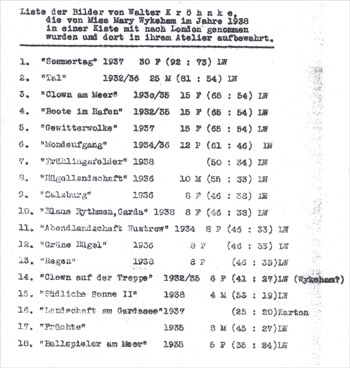 Walter Kröhnke was missed in action in March 1944 somewhere in Russia. Getting in touch with Mary Wykeham after the war was difficult for Louise Kröhnke-Rösler, the artist´s wife. Finally she received a letter from Mary Wykeham dated October 2nd, 1949, where she wrote in German:
“Maybe you remember that I was in Berlin in 1938, where your husband asked me to take some of his paintings with me to England? The paintings are still here with me... What shall I do with the paintings? Time is not good for selling them. But maybe you would like to have them returned to Germany. If not I could try to sell them here (for a little) and send you the money... P.S. I am still painting and shall go to Paris in November to exhibit there.“

In a letter dated January 5th, 1950, Mary Wykeham wrote that she leaving her London studio for Paris, where she wanted to stay for one year. “As regards your husband´s paintings, they are all here together, only four are in St. George´s Gallery, Grosvenor Street, London,W.I. I was told that it is still impossible to send these paintings to Germany.“

At this time Louise Kröhnke-Rösler neither had the means nor could get a permission, a visa, to travel to London to collect the works of her missing husband.

After she had written again in 1956 - travel was then possible - she received in November of that year an answer from Little Sister Mary of Jesus at the Fraternity of Jesus, 7 Pratt Walk, London, S.E.: „I quite understand your grief concerning the paintings of your husband and I am sorry for all that. It is a long time ago that I handed over my studio. For six years I travelled hence and forth and so please understand that the paintings did not remain in the case. I could not take them with me, when I became a nun and went away from England in 1949. I thought it best to leave the beautiful pictures of your husband with several galleries, since I had not any word from you. I am sorry for not finding any list of the works. Now I wrote many letters to all the people who might have some of them, and I hope to regain some of them, since they were not supposed to be sold - only to be exhibited ...“

On April 5th , 1957 Little Sister Mary of Jesus wrote that she still did not have news of the pictures. She invited Louise Kröhnke-Rösler to come to London to look for the paintings in the various galleries herself and invited her to stay in the fraternity house in South London.

In October 1958 a neighbour of Louise Kröhnke-Rösler and in the same time attorney visited London and tried to find the works of Walter Kröhnke. Sister Mary denied ever to have given paintings to galleries. The sheet of adresses of galleries, which she had given to the German attorney a few days before, was handed out by mistake - she claimed. She had just left the pictures in her studio, when she entered the convent. Maybe the neighbours had taken all the paintings.

Now Anka Kröhnke, the daughter of Walter Kröhnke, is again searching to find out, where the paintings of her father are. She would just be happy to know the whereabouts of some of them.